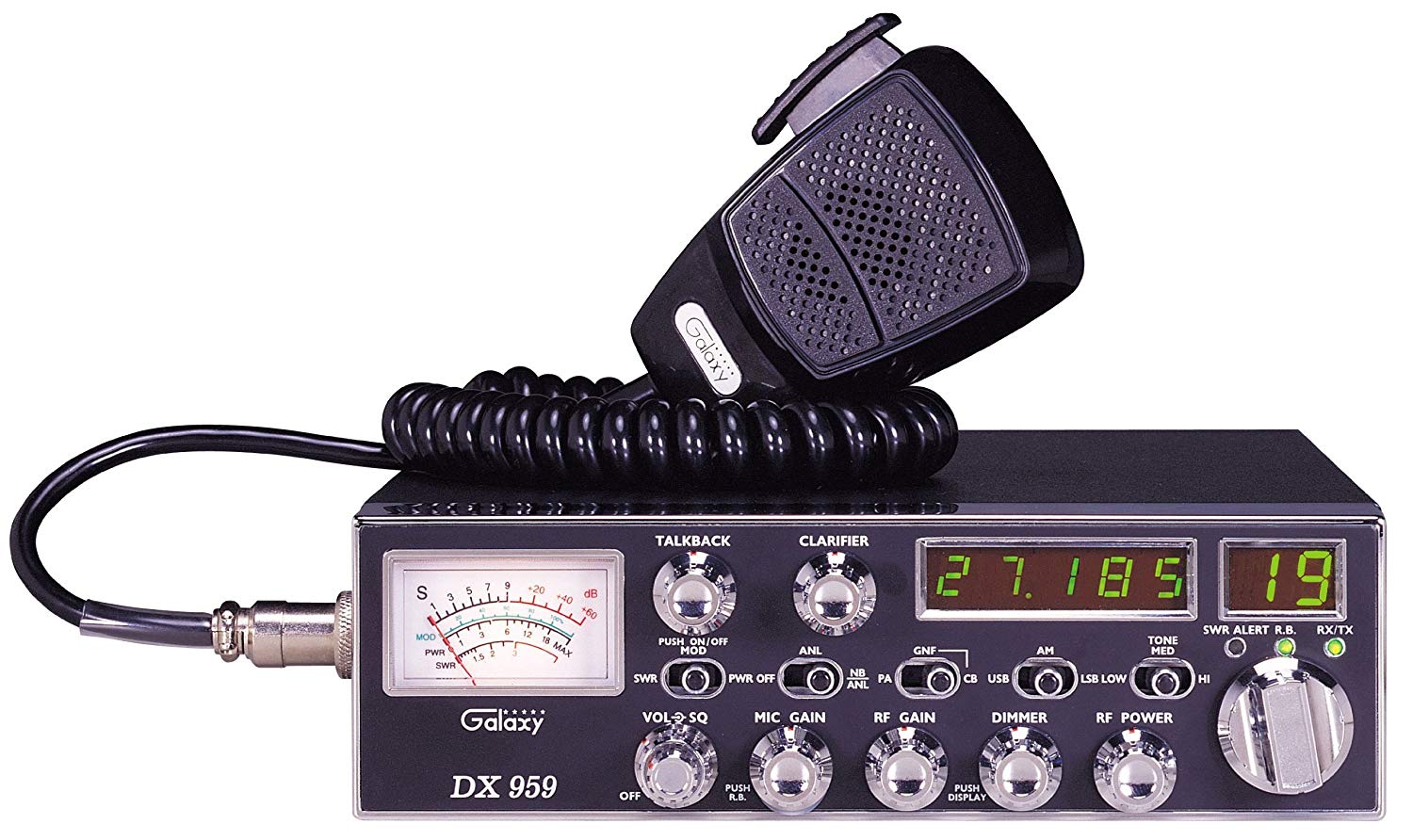 As a CBer addict, a Galaxy DX 959 review became an itch I needed to get out of the way when I came across what Galaxy said about the CB radio. It’s not everyday manufacturers push a single product ahead of the others in their inventory and tag it ‘solid performer…top of our mobile CB’.

That’s a bold statement to make considering they have similar products on offer. For instance, it would be hard to tell the DX 949 or the DX 939 apart from the 959 physically. And several features are common to all three.

Fortune smiled on me a few weeks ago. A friend of mine had just installed the radio in his truck and was fixing to go out on a road trip. I certainly wasn’t going to let the chance of a Galaxy DX 959 review slip by me.

I hurriedly packed the stuff I’d need for a 3-day road trip in a backpack and headed out to join him.

This review of Galaxy’s DX 959 is mostly about the things I observed while traveling cross-country. In essence, it is about my thoughts of the CB radio while seeing it in action over three days. 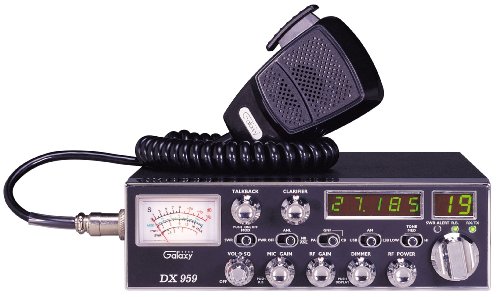 In these days of smaller, more efficient gadgets, the size of the radio was a bit shocking to me. I wasn’t expecting it to take up so much space in the cab.

Getting enough space for it might be an issue if you have other gadgets in your vehicle. With a little creativity though, that shouldn’t be a serious issue.

From what I gathered, the pack came with the radio mounting bracket and another mounting hardware for the microphone. Installation was straightforward and easy. At least, that is what my friend told me and I just have to believe him after all this isn’t his first 2-way.

The large S/RF that is common on most Galaxy is also present in the 959. The large meter meant the readings are easier to read and more accurate than the ones found in radios of other brands.

Due to the large meter, reading the four scales on it is very easy. These are Modulation, SWR, S-Meter (Receive), and Output Power scales.

The meter is backlit by LED light so you won’t problems reading it in low light conditions. During the day, the readings were was also quite legible.

The radio is packed with several tons/knobs on the front panel. Each button controls a specific function such as volume/power, RF Gain, TalkBack, Clarifier, Mic Gain, etc.

This is convenient for when you are driving. You won’t have to look at the display to check if you got the correct button.

The DX 959 comes with a very useful 5 digit frequency counter that is fairly accurate and easy to read. If you decide to expand the frequency, the radio would show the extra frequencies you added.

However, it must be noted that to get the best from the SSB, a six-digit frequency counter would have been better. This is just a small oversight though as having a frequency counter of any kind is a lot better than none at all.

For somebody who has no experience with the TalkBack, I found it very fascinating. I fiddled with it quite a bit to monitor my transmissions and judge the quality of the transmitted audio.

One advantage of the TalkBack is you’d be able to know if you are transmitting when you hear your voice through the speaker.

The TalkBack worked excellently and the variable control is a nice addition for those times you’d want to lower the sound of the TalkBack while transmitting. You could turn it off completely if you don’t want it.

The fact that the DX 959 was designed with three operating modes is rather impressive. Many radios of similar specifications and price point offer just the single or at most dual operating modes.

With the Galaxy DX 959, you get the SSB (Single-sideband modulation), PA mode and the more common AM mode.

I had to wonder though why someone would ever use the AM when you already have SSB. The SSB is basically a more advanced AM that is able to use the transmitter’s bandwidth and power more efficiently.

With the PA mode, you can use the device as a public address system.

From some of the technical details online, this radio is equipped with mosfet transistors. The experts would tell you that this singular fact ensures the device would crank out, on the average, between 5-8 watts peak power output.

With that in mind, I expected the Galaxy’s DX 959 to perform excellently and it did not disappoint.

The device has a good receiver. The tone quality is comparable with some of the best ones on the market. Of course, this would depend largely on who is doing the tuning.

Combined with the various noise/static-reducing features and excellent audio output you are not likely to strain your ears to pick out words from various transmissions. I certainly didn’t even from far off transmitters with weak signals.

The loud audio common to Galaxy radios made a difference in the reception quality on SSB and AM transmissions. On SSB, the radio was very loud and clear. Turning up the AMC very high didn’t affect the quality of the reviewed transmission on SSB.

A thought occurred to me while I was appreciating how loud the output was. Using a power mike would definitely give you concert levels sound output.

I believe the mosfets contributed a great deal to the power output of around 28 watts when I deadkeyed it from around 7 watts. My friend informed me a swing of around 15 watts is common from a 1-watt deadkey. I found that really impressive.

The radio would have been perfect but for some quirks. In the first place, the frequency counter produced some noise that was picked up by the receiver. I understand this is not common to all the 959. It could be a quality control issue on this particular radio.

Again, before the radio reaches its optimal operating temperature, there is a noticeable drift on the SSB. It levels out though after it hits the right temperature.

Finally, there are different warm-up times for the receiver and transmitter. But this could easily be resolved by unlocking the clarifier.

The Galaxy DX 959 review you just read showed Galaxy were not just throwing out a sales pitch with that claim about the radio being one of the best.

The CB radio is packed with several useful features. The large display makes it easy to read the meter and the fact that most functions have dedicated knobs is awesome. Finding your way around it and mastering how to use won’t be a problem.

If the true value of any gadget is measured by how easy it is to use, the number of useful features and general quality, then this radio would receive top marks from any user.