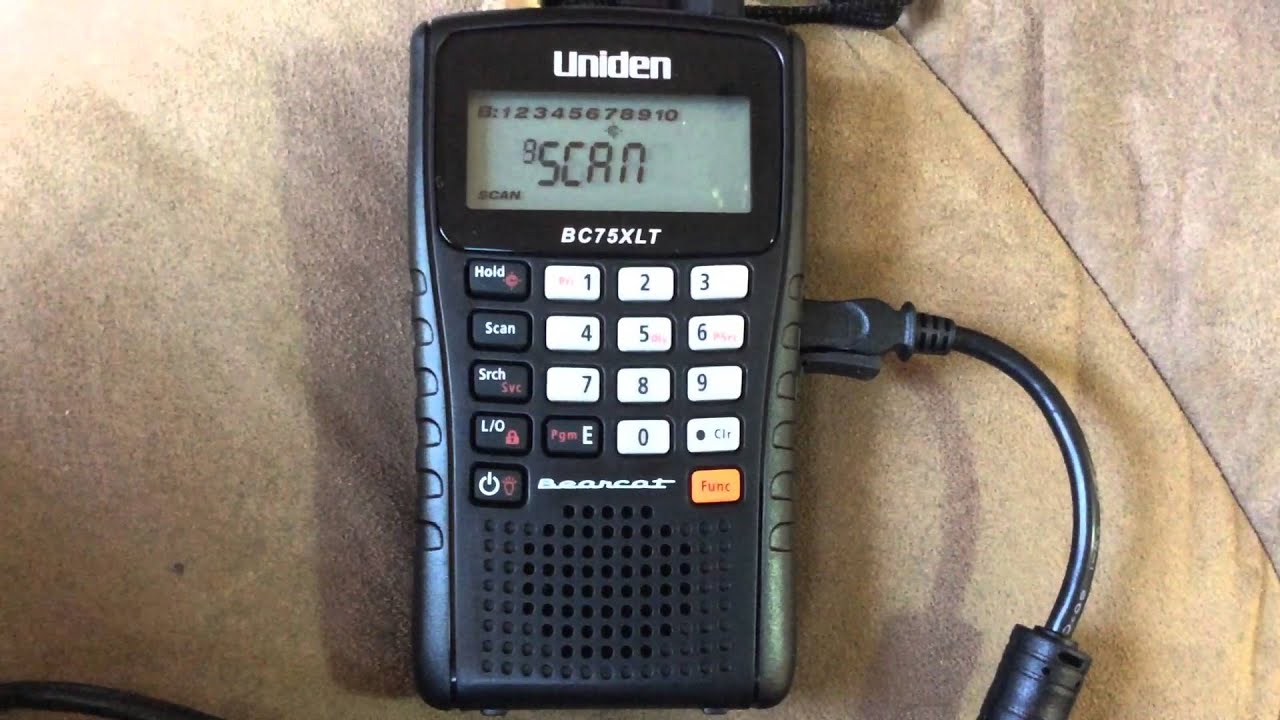 Recently, our neighborhood’s captain asked that I recommend a good scanner for the watch.

There has been a spike in vandalism, burglary, and other crimes…

and he needed something that could monitor RF chatter from various sources including the police and security agencies.

This Uniden BC75XLT review became necessary because he needed it to convince the squad it was the best choice given their limited resources.

And why the Uniden BC75XLT you might ask? The scanner has been part of my life for quite some time now. It’s what I use to monitor transmissions from the nearby airport or when I’m close to the railway station. And of course, as a racing man, it is very handy at the tracks.

Recommending it was a no-brainer. The neighborhood watch didn’t need a sophisticated scanner with a long range. And this seemed to have everything they needed to do their jobs effectively.

The BC75XLT is a black, compact unit with an ergonomic design. It is just about 14 oz with the batteries included. For a grown man, that is a comfortable weight to hold. Add the horizontal grooves carved on the side and you get a scanner that would not fall off easily from your grasp.

The casing is plastic so you might have to be careful it doesn’t drop or banged with force on hard surfaces. That could crack it.

All the buttons are on the front with the LCD display at the top. The display is large enough so you don’t have to squint to make out figures and letters on it. As usual with modern scanners, the LCD display has a backlight for night time operation.

Inside the box is a flexible BNC antenna, a belt clip, USB charging cable, software, and owner’s manual.

A quick word on the antenna: for a neighborhood watch, or scanning for nearby signals from airfields, emergency services, local police, and sporting events, the antenna is okay.

But if you want more range, you can always purchase a better one. Fortunately, the BNC connector-type antenna means it shouldn’t be hard to get compatible high-grade antennas.

Novices might have a problem with the manual though. As a unit that needs to be programmed with the channels, it seems obvious Uniden should have spent time showing folks how to do it. Instead, you get lots of instructions on how to scan frequencies. That is also useful to be sure. But they missed a beat there.

Battery – It won’t take you long to figure out how to open the back panel to access the battery compartment. At least, it wasn’t a problem for me.

The dual power source makes it very flexible. You could use 2 rechargeable batteries or two AA batteries. Unfortunately, the batteries are not included in the pack so you’d have to buy them.

I recommend two Ni-MH 2300 mAh batteries if you want to get the best out of it. For some reasons, the disposable AA batteries never seemed to last long. But they are good as backups though.

Finally, it is easy to tell you won’t have problems charging the battery. The USB charging feature means the unit is compatible with all power sources with USB ports. Even AC adapters with USB ports can be used to charge it directly from the public grid.

Programming – Before taking it out for a spin, you might have to program the scanner to include all your preferred channels. You have the option of adding up to 300 channels.  In reality, though, you won’t need so many programmed channels.

The BC75XLT can be programmed either manually or with a PC. You would have to get a good programming cable if you want to use your PC.

With the cable and the included software, programming the frequencies was easy. But if you have tons of channels to program, the tedium of repetition might get to you.

The good thing is that you’d only have to do this only once since the memory function stores the channels. And if you can customize the channels, go ahead and do it so you’d it find it easy to know which frequency you are monitoring.

Manual programming is more involved and takes a bit of time too. This should be a backup option if it is impossible to use the pc for some reason.

You could refer to user’s manual for instructions on how to do it manually. If that is too sketchy for you, put a call through to Uniden customer care for help. Or if you know a radio expert nearby, you could take it to them to do it.

Now you are set up and ready to go. Simply switch it on a start scanning.

One thing you would cotton onto pretty fast is that the controls are intuitive. Which is a good thing considering the manual is a let down in the ‘How to use’ department.

When I used it for the first time at the tracks, I was able to pick up transmissions quite easily. It helped that I had already programmed the race track’s frequencies. This was down to the Close Call RF Capture technology.

Close Call RF Capture – This feature has several benefits. With it, the radio is able to scan and home in on the closest signals. It doesn’t use up resources trying to get distant signals.

The feature makes it easy to intercept signals from emergency services and the security agencies. Experienced users take advantage of the feature to scan hidden local frequencies for messages being relayed across the area.

You should know that frequencies in the 800 MHz band can’t be scanned by this device. So if the police or other agencies are using that channel, you’d have to consider getting a different scanner if a monitoring police signal is your priority.

That said, I was able to able to monitor quite a lot of RF chatter most of the time with the stock antenna. The onboard speaker and audio quality were also top-notch.

Talking about the volume, it is regulated using the knob at the top of the unit. The thing is, the same knob also controls the squeak and SEL functions. It’s not unusual to accidentally change the channel when all you wanted to do was adjust the volume. You would get the hang of it with time.

As for the display, it works best when you are trying to read it straight on. From an angle, it is just a blur. The screen lights up when you press and hold the lower left button.

Battery life – Some folks insist they get up to 12 hours with the AA batteries. But I have never been that lucky. 4 hours was the most I got the few times I opted to use them. Perhaps, something is wrong with my set.

The rechargeable batteries though are awesome. On many occasions, the scanner was still full of life after using it throughout the day. Unfortunately, there is no battery meter to let me know how much power I had left.

Other features of the Uniden BC75XLT

It is obvious from this Uniden BC75XLT review that I’m fairly pleased with the performance of the scanner.

If all you want is a lightweight RF scanner to monitor nearby transmissions, this device would do just fine. It is lightweight and easy to carry around. Besides, the belt clip comes in handy if you need to use your hands for other tasks or you are just plain tired of holding it.

The 300 programmable memory channels, intuitive buttons, easy setup and flexible antenna with the option to swap it for a better one makes this Uniden scanner a favorite of users who just want to know what is going on in the local RF universe.

Once you get past the disappointment of not being able to scan the 800 MHz band and a few other minor downsides, you would have an awesome affair with it.